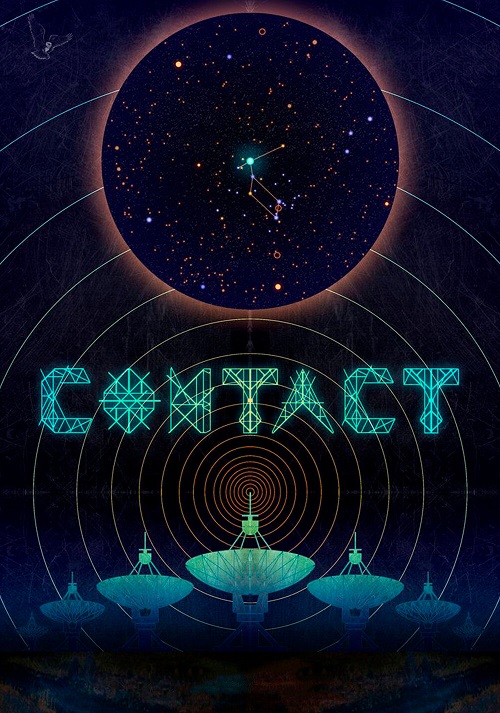 “If we are alone in the universe, it sure seems like an awful waste of space.”

But, how do we know if we are not alone in this universe?

When I was child, I always imagined that there was life out there.  Star-ship, interstellar adventure, futuristic technology, even aliens with their squid-body are the form of living out of the earth. But, some people argued that “There is no evidence to prove it.” And I said, “Yes, all of that is only my imagination.” But, that has all changed since the first time I watched this movie, Contact (1997).

The first time I watched Contact was in 2003 (when I was 8). At that time, I didn’t really understand the meaning and values from this movie. But I really admire the character Dr. Ellie (Jodie Foster) because of her persistence and strong belief about the creatures out there. Then, the second time I watched Contact in 2010, I started to understand the storyline, meaning, and values in the movie, and suddenly I fell in love with this movie. In 2017 I watched it again, and again in early 2020. So addicted.

Contact is a film adaption of Carl Sagan’s 1985 hard science fiction novel (Carl Sagan is known as American astronomer, planetary scientist, cosmologist, astrophysicist, astrobiologist, author, and science communicator). Carl Sagan wrote this novel with his wife, Ann Druyan, since 1979 (Couple goal, indeed). They wrote Contact as a film treatment more than 100 pages long, then they decided to convert into a novel. Contact made into a movie from September 1996 to February 1997, with directed by Robert Zemeckis. The movie was released in 1997.

With duration time is 150 minutes, Contact shows with the theme of contact between humanity and a more technologically advanced, extraterrestrial life form. Starting with Dr. Ellie Arroway (Jodie Foster) works for the SETI program for radio-astronomy, hoping to find evidence of another life in the universe. Since childhood, she has had an interest in the universe, communication, and science. Guided by her father, Little Ellie always tried to make contact using a radio device. She did it consistently, no matter what people say. However, her efforts were halted because the president’s scientific adviser, David Drumlin (Tom Skerritt) withdrew funds from SETI because he believed that Ellie’s efforts were in vain. Ellie tried to seek financial support until finally getting funding from Hadden Industries “The Secret Billionaire”, which allowed Ellie to continue the project in New Mexico. Ellie meets the religionist, Palmer Joss (Matthew McConaughey *fun fact: in 20 years he will take the lead roles in Interstellar “hard science fiction too”). They bonded with each other overnight and eventually they had to separate because Ellie had to leave to continue her program. Four years later, Ellie found a signal repeating a sequence of prime numbers, apparently sent from the star system Vega about 26 light years away. This finding made Drumlin and the Government take control of the program. The search for traces of life from outer space goes on, wrapped in complexity, intrigue, and conflict.

“The character of Ellie, who experienced tragedy as a child, admires the universe and believes in the existence of creatures out there. With persistence and toughness, making discoveries that gradually unravel and answer the mystery. That’s all she did without giving up. Small steps, Sparks.”

With the intersection of science, faith, and politics (those are three subjects that don’t always fit easily together), Contact takes the main two equally compelling sides of the argument and thought with scientist (represented by Ellie) and religious (represented by Palmer). The purpose of science is to discover the truth with evidence, it means that science demands proof. But religion makes believe without proof. It was represented by a scene when Palmer asks Ellie if she loves her father and then asks her to prove it, but she couldn’t.

[After Ellie challenges Palmer to prove the existence of God]

Palmer : Did you love your father?

Palmer : Your dad. Did you love him?

I think this is a simple conversation to explain the connection between religion and science without much debate. In addition, when Ellie had the opportunity to contact other creatures in Vega for 18 hours, she could not prove it to the public because the recording camera did not work. The truth was at stake. At the beginning, Ellie did not believe anything without proof, but after she had experienced the contact, her eyes were opened. I realize that everything can’t be proven directly. Perhaps, because we don’t have technology yet to achieve it, or maybe because we are less sensitive to the universe (even the universe constantly trying to communicate with us). Contact made such an impact on me with its captivating depiction of the eternal struggle between science and religion.

“Carl’s and my dream was to write something that would be a fictional representation of what contact would actually be like, that would convey something of the true grandeur of the universe.”

The criticism brought in that era is how human beings are too dependent on the media, it can influence human perspectives on reality. Zemeckis tried to describe the influence of the media in a simple scene. Contact illustrates that the media becomes a big part in the process of documentation of technological development. All eyes of the world are shifted with that information and make many movements (represented in scenes about various groups with different characters are camping in front of satellites). Zameckis also described everything about monitors. Ellie’s workplace is full of monitors, Ellie’s communication with Hadden monitors, reporting to the public through monitors, even placing the TV monitor in a film frame. People will believe what they see through the monitor, by evidence, by proof. But, when Ellie goes to Vega and the entire 18 hours journey is not recorded, then we realize that the monitor reduces the reality.

Sometimes, we really need to enjoy and feel the moment without interruption from the media.

Now, try to contemplate this.

Contact begins with the Earth scene and many voices: news, songs, speeches, and many things emitted from radio and television. Start slowly moved away from the earth, the sound slowly faded and finally disappeared. Until finally we come out of our galaxy and see the beauty of our galaxy, as if “when we get out of all this, beauty and calm will come to us.” Then the beauty of the universe is in the eyes of a child (Little Ellie) who was trying to communicate with universe via radio. Then, in the last 30 minutes in the movie, Ellie found herself getting the experience of travelling to Vega and seeing a new world with her own eyes. She experienced the most important moments in human history, but she experienced it alone. Thus she appreciates the findings even though from her own experience. She told it to people, to us, but without proof.

From all of this, do you still believe:

Are we alone in the universe?

This is the best conversation I think.

Ellie Arroway  : Is this some test?

[The Being disguised as her father holds Ellie’s hand]

The Being  : You have your mother’s hands… You’re an interesting species, an interesting mix. You’re capable of such beautiful dreams and such horrible nightmares. You fell so lost, so cut off, so alone, only you’re not. See, in all our searching, the only thing we found that makes the emptiness bearable, each other.

Ellie Arroway  : [she stands up] Home? But I have so many questions, do we get to come back?

The Being  : This was just a first step. In time you’ll take another.

Ellie Arroway : But other people need to see what I’ve seen, they need to see…

The Being  : This is the way it’s been done for billions of years. Small moves, Ellie. Small moves.

This site uses Akismet to reduce spam. Learn how your comment data is processed.